Alcohol and Energy Drinks (by DaytonDUI.com)

Alcohol and Energy Drinks (by DaytonDUI.com) 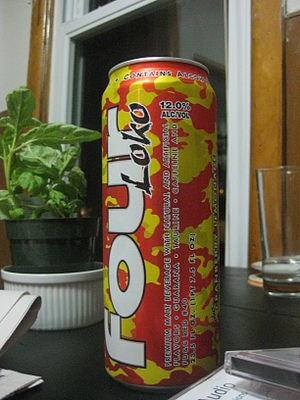 In 2005, the Drink Four  Brewing Company introduced Four Loko to the American malt beverage market. The name “Four” is derived from the original energy drink’s four main ingredients: alcohol, caffeine, taurine, and guarana.  There are three product lines within the Four brand:

Original formulations of both beverages were a malt liquor-based, caffeinated alcoholic energy drink with added guarana and taurine. The formulations were developed by three alumni of The Ohio State University: Chris Hunter, Jeff Wright, and Jaisen Freeman.  Almost immediately following the introduction of the drinks, a coalition formed in opposition to the beverage.  Critics suggested that consuming energy drinks with alcohol can be harmful in reducing the perception of alcohol intoxication and/or in leading to increased alcohol or drug consumption.

In 2009, a group of US state attorneys general began active investigations of companies which produced and sold caffeinated alcohol beverages, on the grounds that they were being inappropriately marketed to a teenage audience.  The attorneys general were also concerned that these drinks could pose health risks by masking feelings of intoxication.  Colleges and universities joined the chorus against the beverages in 2010 when they began to see injuries and blackouts related to the drink’s use.  The University of Rhode Island banned this product from their campus on November 5, 2010. [sourced via Wikipedia].  Several stores, including Tops Markets, Price Chopper and Wegmans have voluntarily pulled the product from their shelves.

Under mounting pressure, Phusion withdrew Four Loko from the State of New York in November, 2009.  The beverage was banned in Oregon by a 4-1 vote of the Oregon Liquor Control Commission in that same month.  Citing health and safety concerns, Oklahoma joined the movement against the sale of Four Loko.  Michigan soon followed suit.  Id.  According to a statement from the Michigan Liquor Control Commission, “The decision was made in light of several studies regarding alcohol energy drinks, the widespread community concerns aired by substance abuse prevention groups, parent groups and various members of the public, as well as the FDA’s decision to further investigate these products.” [source]  The New York State Liquor Authority moved for a full  ban as of November 19, 2010. New York state senator Chuck Schumer and New York City councilman James Sanders Jr. have approached the Obama administration to ban Four Loko across the state of New York.  Ohio did not join the stampede.  Instead, they took a wait and see approach.  “We are continuing to monitor the situation,” a representative of the Ohio Department of Commerce Division of Liquor Control said. “However, a legislative change would be needed to the statute in order for the superintendent to disapprove a product.” [source]

On November 17, 2010 the U.S. FDA Food and Drug Administration dropped the proverbial hammer.  They issued a warning letter to four manufacturers of caffeinated alcohol beverages citing that the caffeine added to their malt alcoholic beverages is an “unsafe food additive” and said that further action, including seizure of their products, may occur under federal law.  It declared that beverages that combine caffeine with alcohol, such as Four energy drinks, are a “public health concern” and can’t stay on the market in their current form.  But is this drink really a public menace?

As reported at Alcohol Problem and Solution, a site maintained by Dr. David J. Hanson of the State University of New York, the research does not support the level of outrage generated by the public.  To examine the scientific evidence on the effects of mixing energy drinks and alcohol, a review of the research was conducted. It found

The review was conducted by researchers at the Utrecht Institute for Pharmaceutical Sciences at Utrect University, Utrecht, The Netherlands, and published in the International Journal of General Medicine.  If you wish to review the research, please consult the following:

DUI attorney Charles M. Rowland II dedicates his practice to defending the accused drunk driver in Dayton, Springfield, Kettering, Vandalia, Xenia, Miamisburg, Springboro, Huber Heights, Oakwood, Beavercreek, Centerville and throughout Ohio.  He has the credentials and the experience to win your case and has made himself the Miami Valley’s choice for DUI defense.  Contact Charles Rowland by phone at 937-318-1DUI (937-318-1384), 937-879-9542, or toll-free at 1-888-ROWLAND (888-769-5263).  For after-hours help contact our 24/7 DUI HOTLINE at 937-776-2671.  For information about Dayton DUI sent directly to your mobile device, text DaytonDUI (one word) to 50500.  Follow DaytonDUI on Twitter @DaytonDUI or Get Twitter updates via SMS by texting DaytonDUI to 40404. DaytonDUI is also available on Facebook and on the DaytonDUI channel on YouTube.  You can also email Charles Rowland at: CharlesRowland@DaytonDUI.com or write to us at 2190 Gateway Dr., Fairborn, Ohio 45324. “All I do is DUI”