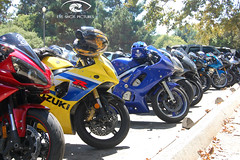 It is harder to control a motorcycle than it is to drive a car.  The motorcycle requires a need for greater coordination and balance.  Motorcycle accidents also carries a considerably greater risk of injury or death.  An assessment of operating performance of experienced motorcyclists using a motorcycle simulator reveal positive correlations between potentially fatal errors and breath alcohol levels well below the then-accepted legal limit of intoxication of 0.10 g/dL (Colburn et al., 1993).  Performance decrements were noted as BAC increased from 0.038-0.059 g/dL (Robinson et al., 1990).

Motorcyclists drink at a higher percentage than car/truck drivers, but the motorcycle operators have an overall lower BAC than those arrested for impaired driving in a car or truck (Watson et al.,  1992).  According to the National Highway Traffic Safety Administration (NHTSA), motorcyclists involved in fatal crashes are 2.5 times more likely to have consumed alcohol than passenger vehicle drivers.  In 2007, the number of alcohol-impaired motorcyclists in fatal crashes increased by 10 percent while the number of alcohol-impaired drivers of passenger cars declined 6 percent.  (NHTSA defines “alcohol impaired” for vehicle operators over 21 with Blood Alcohol Content (BAC) measured over the 50-state legal limit of 0.08 grams/deciliter.)

The National Highway Transportation Safety Administration (NHTSA) has also developed a guide specific to motorcycle operators.  The basis of this motorcycle guide are based on a 1993 study, The Detection of DWI Motorcyclists, DOT HS 807 839, March 1993; Jack W. Stuster, Anacapa Sciences Inc., wherein police reports were used to identify “cues” of impaired drivers.  Over 100 “cues” were narrowed down to 14.  NHTSA lables 7 of these “cues” as “excellent” predictors of impairment and 7 are considered “good” predictors of impairment.  According to NHTSA “excellent” is defined as having a greater than 50% predictive capability.  ”Good” means that the tests are 30-50% predictive (much less than a coin toss).

The “cues” that police officers look for when investigating impaired motorcycle operators are:

Good Cues (30-49% probability)
The guide does not tie the cues to any correlated BAC.  Instead it simply uses the cues to say that a driver is “DWI” without defining what that means in terms of BAC or impairment.  Another glaring problem with the study is the fact that experienced police officers do not think it is valid.  At page three the guide states, “…some officers, even those with many years of experience reported they believe there are no cues that can be used to distinguish DWI from unimpaired motorcycle operation.”  My own anecdotal evidence suggests that, given the increased possibility of grievous injury,  police officers hold motorcyclists to a higher standard and are more likely to assess any alcohol consumption on a motorcycle as dangerous.  Given the studies, this bias may be well-founded.

DUI attorney Charles M. Rowland II dedicates his practice to defending the accused drunk driver in Fairborn, Dayton, Springfield, Kettering, Vandalia, Xenia, Miamisburg, Springboro,Huber Heights, Oakwood, Beavercreek, Centerville and throughout Ohio.  He has the credentials and the experience to win your case and has made himself the Miami Valley’s choice for DUI defense.  Contact Charles Rowland by phone at 937-318-1DUI (937-318-1384), 937-879-9542, or toll-free at 1-888-ROWLAND (888-769-5263).  For after-hours help contact our 24/7 DUI HOTLINE at 937-776-2671.  For information about Dayton DUI sent directly to your mobile device, text DaytonDUI (one word) to 50500.  Follow DaytonDUI on Twitter @DaytonDUI or Get Twitter updates via SMS by texting DaytonDUI to40404. DaytonDUI is also available on Facebook and on the DaytonDUI channel on YouTube.  You can also email Charles Rowland at: CharlesRowland@DaytonDUI.com or write to us at 2190 Gateway Dr., Fairborn, Ohio 45324.