DUI Arrests Are Up, Fatalities Are Down

DUI Arrests Are Up, Fatalities Are Down 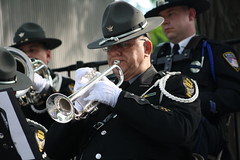 Preliminary reports released by the Ohio State Highway Patrol show that 14 people were killed on Ohio’s roadways between the Wednesday before and the Sunday after Thanksgiving. In 2010, 18 people died during the same period and in 2009 20 lost their lives.  Numbers are down despite this year’s reporting period being longer as it included the entire day before Thanksgiving while last year’s reporting began at 6:00 p.m. Wednesday.

The Ohio State Highway Patrol considered this weekend a major success.  In a press release Colonel John Born, Patrol superintendent stated, “[w]e are encouraged by the reduction of fatalities and the increase in the arrests of criminals using our highways to carry out their crimes.  I hope that the success of this holiday weekend will continue throughout the remainder of the year.”