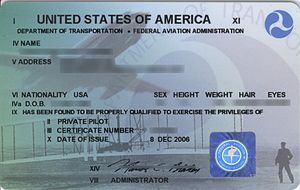 Representing a pilot is one of the most specialized areas of DUI (drunk driving) practice.  Often, even if the pilot avoids a DUI conviction, consequences may still exist based on the fact that the pilot refused a breath test or blew over the legal limit.  Charles M. Rowland II has represented members of the military, military and civilian pilots, law enforcement, paramedics/EMTs and other who face a career-ending DUI charge.  Military pilots and private pilots face strict rules imposed by the Federal Aviation Administration (F.A.A.).  We protect your pilot’s license. If you are a pilot charged with drunk driving you need to seek the advice of qualified counsel as soon as possible.  You need to contact a qualified attorney right away.  Seek out the services of an attorney to answer your specific questions about the specific facts of your case.

REPORTING. Be aware that failure to properly report the arrest, conviction, and/or Administrative License Suspension (the 2255 form which has an impact on your driver’s license because of the arrest) could result in an “emergency order of revocation” used by the United States Department of Transportation, Federal Aviation Administration (FAA) which could result in the revocation of your Airline Transport Pilot (or other pilot’s license) and Medical Certificates. Section 61.15(e) of the Federal Aviation Regulations provide the DUI or alcohol related driving offense must be reported “not later than 60 days after the motor vehicle action.” The motor vehicle action includes each alcohol related event including any administrative license suspension (driver license suspension, revocation, or cancellation) or any conviction. Each incident requires the pilot file a separate “Notification Letter.” A pilot’s driver license may be suspended at the time of arrest for driving under the influence of alcohol for either failing or refusing a blood / breath test.  The action that must be reported includes the administrative suspension of your driver’s license and the conviction.

Each person holding a certificate issued under this part shall provide a written report of each motor vehicle action to the FAA, Civil Action Security Division (AMC-700), P.O. Box 25810, Oklahoma City, OK 73125.  The report must include:

Charles M. Rowland will assist you in completing the FAA Notification Letter so that you can be sure that all information on the form is correct and complete.  Please note that the report must be made to the FAA, Civil Action Security Division in Oklahoma City, not your local Flight Standards District Office (FSDO) or Certified Flight Instructor (CFI). Section (f) provides that the “[f]ailure to comply with paragraph (e) of this section is grounds for . . .(2) Suspension or revocation of any certificate, rating, or authorization issued under this part.”

The proper reporting of the DUI/OVI incident is vital.  Upon proper reporting, the FAA will complete a case file, verify the status of the pilot, obtain a copy of the pilot’s driving reports, and compare the information on the Notification Letter with the driving records.  The FAA has a great deal of discretion in dealing with DUI pilots.  The facts of the case, who was in the car, the publicity created by the incident and other factors will be considered.  The FAA may not take any other action if the pilot does not have two incidents within three years, properly disclosed the incident on the Application for Airman Medical application (if applicable), and complied with the Notification Letter requirements. Disqualification may result after the DUI arrest due to the medical implications of a DUI.  Discuss with your attorney the efficacy of undergoing a drug and alcohol evaluation and follow-up treatment.  Charles Rowland has a decades long relationship, as both president of the board and a member of the board of directors, of Greene County’s Drug and Alcohol treatment provider.  He can help.

Based on these factors and pursuant to 49 U.S.C. Section 44709 and 46105(c) the Administrator could order the following:

If an adverse action is taken by the FAA, you may seek review of the FAA’s determination that an emergency exists in your case.  You may request such review in a written petition filed within two days after your receipt of this order. Petitions for review of the FAA’s emergency order attached tot he petition, by facsimile or by an expedited means that ensures next-day delivery to the FAA’s attorney at the same address provide in the order and the following address:  Office of Administrative Law Judges, National Transportation Safety Board, Room 4704, 490 L’Enfant Plaza East, SW, Washington, DC 20594, fax: 202-314-6158.

If you find yourself facing a potentially career-ending DUI charge, please consult with Charles M. Rowland II at 937-318-1DUI (937-318-1384), 937-879-9542, or toll-free at 1-888-ROWLAND (1-888-769-5263).  For after-hours help contact our 24/7 DUI HOTLINE at 937-776-2671.  Immediate help is available by filling out this CONTACT form.  For information about Dayton DUI sent directly to your mobile device, text DaytonDUI (one word) to 50500.  Follow DaytonDUI on Twitter at www.Twitter.com/DaytonDUI or Get Twitter updates via SMS by texting follow DaytonDUI to 40404. DaytonDUI is also available on Facebook and you can access updates by becoming a fan of Dayton DUI/OVI Defense.  You can also email Charles Rowland at: CharlesRowland@CharlesRowland.com or write to us at 2190 Gateway Dr., Fairborn, Ohio 45324.