Ohio Boating Law and Boating Under the Influence

Ohio Boating Law and Boating Under the Influence 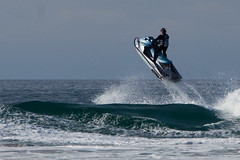 Ohio is cracking down on impaired boaters following a report from the United States Coast Guard which says Ohio is tied with Illinois with 18 alcohol-related accidents last year and trailed only Florida and Wisconsin, which had 25 and 19 respectively.  Alcohol is the leading contributing factor in fatal boating accidents, and was the leading factor in 16 percent of recreational boating deaths last year, according to the Coast Guard. Alcohol was a factor in five boating deaths and 21 injuries in Ohio in 2011.  In response, the Ohio Department of Natural Resources’ Division of Watercraft is joining units throughout the nation this weekend in Operation Dry Water, an effort to increase or concentrate patrols in problem areas to watch for impaired boating.  According to news reports, this crackdown will include Alcohol Checkpoints on Ohio’s waterways, so be prepared.  The information below will give you a good overview of Ohio law as it relates to boating and boating under the influence.

Q. Is Boating Under The Influence A Crime In Ohio?

Boating Under the Influence is illegal in Ohio. 2001 Sub. S.B. 123, eff. 1-1-04 sought to unify the drunk driving provisions with Ohio’s boating laws.   O.R.C. 1547.11(A)(1)  to O.R.C. 1547.11(A)(6) prohibit a person from operating or being in physical control of a vessel underway or manipulating water skis, aquaplanes, or similar devices while under the influence of alcohol or drugs.  O.R.C. 1547.11(A)(1) is the impairment provision of the law, preventing operation or physical control while under the influence.  The law also has a provision preventing operation with a prohibited level of alcohol which it sets at the same prohibited level (.08) as the DUI/OVI law.  Unlike the DUI/OVI law, there are no high-tier provisions which apply to boating. A third section of the law prohibits operation or physical control with a concentration of certain controlled substances (marijuana, cocaine, amphetamine, et al.) or metabolites of the same.  This section of the law is identical to the DUI-drug provisions found in O.R.C. 4511.19(A)(1)(j).

Q. How Can A BUI Or Similar Offense Affect My Driver’s License?

Some important differences in Ohio’s BUI law, stem from the fact that Ohio does not require an operator’s license to operate a watercraft.  Therefore, no administrative license suspension provisions are in the law.  Instead, the chief of the Division of Watercraft gives written notice that you are prevented from operating or being in physical control of a watercraft (or from registering a watercraft) for one year from the date of the alleged violation.  Another key difference is that a fourth or subsequent BUI offense is not subject to felony enhancement.

Q. What Are The Penalties for Boating Under The Influence?

Penalties for Boating Under the Influence offenses are set forth at O.R.C. 1547.99 and are similar to those provided for DUI/OVI offenses.  Boating Under the Influence is a first degree misdemeanor and is subject to a minimum 3-day jail sentence and a maximum 6 months in jail.  The 3-day jail sentence can be served in a qualified driver intervention program.  The minimum mandatory fine for a first BUI offense is $150.  A second offense within 6 years carries a mandatory 10 day jail sentence, but the minimum mandatory fine is still $150.  A third offense requires a minimum of 30 days in jail. Subsequent amendments to the law, 2007 Am. Sub. S.B. 17, eff. 9-30-08, allows for forced blood draws for persons with two or BUI offenses.  A BUI offense can be used to enhance a subsequent DUI/OVI  offense. O.R.C. 4511.181(A)(6)-(7).  NOTE: The Ohio legislature is constantly “tweaking” the Ohio DUI and BUI laws, so please check with an attorney as these laws may have changed.

Q. Do I Need A License To Operate A Boat Or Watercraft In Ohio?

You do not need a valid driver’s license to operate a boat or watercraft in Ohio.  Ohio law requires that boaters born on or after Jan. 1, 1982, must successfully complete either a boating course approved by the National Association of State Boating Law Administrators or a proficiency exam approved by the Ohio Division of Watercraft in order to operate a boat powered by more than 10 horsepower.

Q. Are There Age Restriction In Ohio?

Children 16 and older can operate a PWC as long as they have an education certificate. And children have to be 12 or older to operate a canoe or kayak without supervision.

Q. Am I Required To Register My Watercraft or Boat?

Registration is required for every recreational boat in Ohio, including canoes, kayaks, pedal boats, inflated boats and paddle boards. The United States Coast Guard recently designated float tubes as vessels so they must also be registered under Ohio law, the exception is float tubes with one air cell. Boat registrations are good for three years.  The Ohio Boat Operator’s Guide is available online at The Ohio Department of Natural Resources website also has information on NASBLA-approved classroom and online boater education courses.

Q. Am I Required To Wear A Lifejacket?

Ohio law requires that lifejackets be worn while riding a personal watercraft, while waterskiing or being towed on a similar device and for children younger than 10 on any vessel less than 18 feet in length. Personal flotation devices need to be available for all passengers whether they are on a powerboat, sailboat or a manually propelled watercraft.  According to U.S. Coast Guard regulations they need to be USCG approved and readily accessible.  They cannot be stowed away in a locked box.

Q. What Safety Equipment Is Required By Ohio Law?

The safety equipment required by law to be carried onboard depends first on the type of propulsion and then by style and length of the boat. Fire extinguishers, for example, are required on powerboats but not sailboats. The ODNR website has a complete list of all required safety equipment. And if you aren’t sure you have everything you need, the state offers free safety inspections year round.Ohio Department of Natural Resources splash facts

DUI attorney Charles M. Rowland II dedicates his practice to defending the accused drunk driver in Dayton, Springfield, Kettering, Vandalia, Xenia, Miamisburg, Springboro,Huber Heights, Oakwood, Beavercreek, Centerville and throughout Ohio.  He has the credentials and the experience to win your case and has made himself the Miami Valley’s choice for DUI defense.  Contact Charles Rowland by phone at 937-318-1DUI (937-318-1384), 937-879-9542, or toll-free at 1-888-ROWLAND (888-769-5263).  For after-hours help contact our 24/7 DUI HOTLINE at 937-776-2671.  For information about Dayton DUI sent directly to your mobile device, text DaytonDUI (one word) to 50500.  Follow DaytonDUI on Twitter@DaytonDUI or Get Twitter updates via SMS by texting DaytonDUI to 40404. DaytonDUI is also available on Facebook and on the DaytonDUI channel on YouTube.  You can also email Charles Rowland at: CharlesRowland@DaytonDUI.com or write to us at 2190 Gateway Dr., Fairborn, Ohio 45324. “All I do is DUI.”