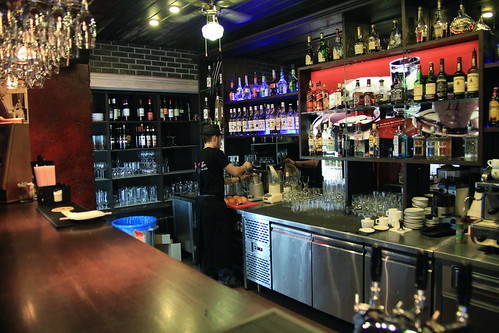 Suppose a person sits at a bar in Richmond, Indiana listening to John Mellencamp on the juke box and drinks to a point where he exceed the .08% BAC limit in Indiana.  The person then gets in his car and drives from Richmond, Indiana into Ohio.  While in Ohio and still in excess of the .08% BAC limit he drives through Eaton, Preble County, Ohio.  Leaving Enon, the driver is noticed by a citizen who alerts the Enon Police Department and the Ohio State Highway Patrol about erratic driving and “Jack & Diane” being played very loudly in violation of the municipal noise ordinance.  Near the Preble County boarder the defendant is intercepted by a trooper who follows him all the way to the Oregon District in Dayton, Ohio.  While listening to “I Fight Authority,” the driver is arrested for Operating a Vehicle Impaired and is summoned to appear in the Dayton Municipal Court.  He also receives summons to appear in Enon Municipal Court (Preble County) and a summons to appear in the court in Indiana.  According to Ohio law where can the defendant be tried?

The Defendant may argue that he was first drunk in Indiana.  Since he was charged in Indiana he argues he cannot be tried for OVI in Ohio.  Ohio disagrees.  In State v. Smith (1991), 61 Ohio Misc. 2d 165, Ohio asserted the right to try a defendant irrespective of whether or not a similar charge exists in another state.  This makes sense from a public policy standpoint as it is the job of Ohio judges to protect Ohio citizens from the harm of criminal conduct.

The only good news for our defendant is that he cannot be tried in both Enon Municipal Court and the Dayton Municipal Court.  Why?  In State v. Anderson (1989), 57 Ohio App. 3d 108 the court held,  “[t]he Double Jeopardy Clauses of the United States and Ohio Constitutions forbid the prosecution of a defendant for drunk driving by a political subdivision when that defendant has already been placed in jeopardy by another political subdivision of the same state for the same offense, stemming from the same underlying course of conduct.”