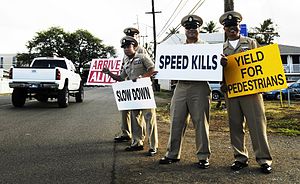 During this past holiday reporting period of Midnight, December 23 through 11:59 a.m. on December 26, eight people were killed, with one death attributed to impaired driving. This represents a nearly 43 percent decline in fatalities from last year when 14 people were killed and the lowest amount of Christmas Holiday fatalities in the past four years. In addition, Patrol OVI arrests increased more than 28 percent. For a complete statistical recap of the Patrol’s Holiday enforcement visit http://statepatrol.ohio.gov/doc/christmas_2011.pdf

Ohio is on pace to see a decline in the number of people killed on Ohio’s roadways in 2011, after experiencing a spike to 1,080 last year. Ohio experienced a record low in 2009 with 1,022 fatalities. So for this year, reports indicate 963 confirmed deaths and an additional 47 provisional unconfirmed deaths, for a total worst case scenario of 1,010 traffic deaths with five days still remaining in 2011.

DUI attorney Charles M. Rowland II dedicates his practice to defending the accused drunk driver in Fairborn, Dayton, Springfield, Kettering, Vandalia, Xenia, Miamisburg, Springboro, Huber Heights, Oakwood, Beavercreek, Centerville and throughout Ohio.  He has the credentials and the experience to win your case and has made himself the Miami Valley’s choice for DUI defense.  Contact Charles Rowland by phone at 937-318-1DUI (937-318-1384), 937-879-9542, or toll-free at 1-888-ROWLAND (888-769-5263).  For after-hours help contact our 24/7 DUI HOTLINE at 937-776-2671.  For information about Dayton DUI sent directly to your mobile device, text DaytonDUI (one word) to 50500.  Follow DaytonDUI on Twitter @DaytonDUI or Get Twitter updates via SMS by texting DaytonDUI to 40404. DaytonDUI is also available on Facebook and on the DaytonDUI channel on YouTube.  You can also email Charles Rowland at: CharlesRowland@DaytonDUI.com or write to us at 2190 Gateway Dr., Fairborn, Ohio 45324. “All I do is DUI.”