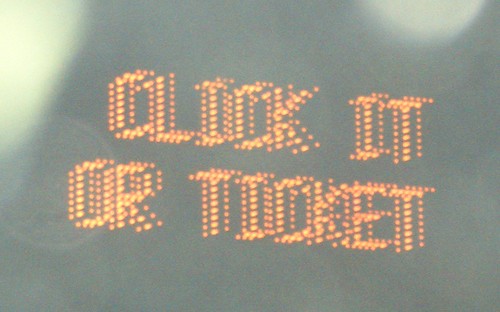 Click it or Ticket our nation’s annual war on seat belts, will begin May 19th and run until June 1st.

NHTSA uses Click It or Ticket as a national campaign centering on the enforcement of seat belt laws.  As with aggressive driving and drunk driving enforcement, the primary audience for this effort is men 18-34.  Research shows that these young men are more likely to not use seat belts.  Seat belts are the most effective safety feature ever invented and have helped save thousands of lives. One in five Americans fail to regularly wear a seat belt when driving or riding in a motor vehicle.  That’s right, all of this over 20% who don’t wear the belt.

The goal of the mobilization is two-fold.  First, it seeks to raise the national seat belt use numbers.  Secondly, it blitzes the airwaves with commercials providing cover for local law enforcement agencies to give seat belt tickets.  If you remember, Ohio grudgingly adopted the mandatory seat belt laws and promised that the seat belt law would not be used as a primary reason to pull someone over (Those were the days). Now, most jurisdictions welcome this campaign because it means grants for overtime, enhanced revenue and justification for traffic enforcement.

To learn more about Click It or Ticket check these city-specific sites at the following links:

Below is the Click It or Ticket commercial that you will see repeated frequently over the next weeks. Enjoy!