“Pull Over for Cops” Law Challenged

“Pull Over for Cops” Law Challenged 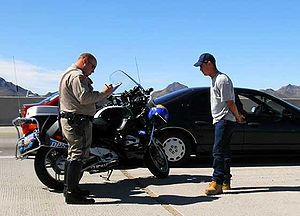 In Ohio you are required, upon approaching a law enforcement vehicle with its lights displayed, to proceed with caution and with due regard to weather and traffic conditions, change lanes if possible.  If you cannot merge then you are required to proceed with caution.  Anyone who has seen those horrific videos of officers being hit by oncoming cars understands the necessity and sanity of this law.

In Village of Kirtland Hills v. Rinkes, 2011-Ohio-2713, a motorist was charged with violating the Kirtland ordinance requiring him to pull over.  The officer was in a stationary emergency vehicle when he witnessed the defendant pass his vehicle.  He gave a warning to the stopped car and proceeded to trail the defendant for the “not pulling over” violation.  While behind the defendant he observed weaving within his lanes, but no traffic violation.  Defendant was subsequently charged with an OVI (drunk driving) offense and filed a motion to suppress challenging the stop.

At a motion to suppress hearing the State bears the burden of going forward. In Xenia v. Wallace (1988), 37 Ohio St.3d 216, the Supreme Court of Ohio held:
{¶22} “Once a defendant has demonstrated a warrantless search or seizure and
adequately clarified that the ground upon which he challenges its legality is lack of probable cause, the prosecutor bears the burden of proof, including the burden of going forward with evidence, on the issue of whether probable cause existed for the search or seizure.” Id. at paragraph two of the syllabus.  In the Kirtland Hills case supra , the issue was not that the defendant should have merged, but whether the State had evidence that he could have merged. When the village was not able to produce evidence that the defendant could have merged safely, they threw out the stop.  The court concluded, “A lack of evidence, by itself is no evidence.”

The 11th District Court of Appeals agreed, holding “[w]e cannot conclude, under the circumstances of this case, however, that the arresting officer’s admitted mistake of fact was either understandable or a reasonable response to the situation. The evidence before the court demonstrated that, as appellee passed the officer’s location, another vehicle was immediately behind appellee’s vehicle in the passing lane.”  The decision of the Willoughby Municipal Court was affirmed.  To see the decision of the court click HERE.