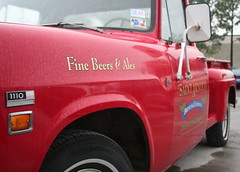 “If you are going to buy a keg, buy it in Ohio,”  or you face violating Ohio law.  Transport issues are answered at the Ohio Department of Commerce/Ohio Investigative Unit website, which states,

“Any resident of this state or any member of the armed forces of the United States, who has attained the age of twenty-one years, may bring into this state, for personal use and not for resale, not more than one liter of spirituous liquor, four and one-half liters of wine, or two hundred eighty-eight ounces of beer in any thirty-day period, and the same is free of any tax when the resident or member of the armed forces physically possesses and accompanies the spirituous liquor, wine, or beer on returning from a foreign country, another state, or an insular possession of the United States.”

According to Ohio Revised Code 4301.60, it is illegal to transport alcohol in the state of Ohio unless you have a permit.  The language of the statute reads,

In practice we see this law most often applied against college students who are transporting kegs of beer from Michigan or Indiana into Ohio.  Such was the case in 2005 when students from the University of Toledo were stopped with Michigan kegs in their possession.  They  successfully challenged the law on constitutional grounds in State v. Eischen, CRB 05-3720 (Lucas County Municipal Court) wherein the trial court held that the law burdened interstate commerce. Full decision HERE. However, the case was reversed in State v. Eischen,2007-Ohio-4473 by Ohio’s Sixth District Court of Appeals in Lucas County.  The Court held that,

Due to the fact that there is no evidence in the record of this cause to support a finding that Eischen purchased the beer for personal consumption and that it was transported and possessed by Eischen and Johnston for that purpose, we reverse the judgment of the municipal court and remand this cause to that court for further proceedings consistent with this decision.Id at 3.

The matter remains open as to whether or not you could prevail on the Commerce Clause argument if you were able to prove that you purchased the alcohol for personal consumption, as the Court of Appeals leaves that door wide open.  Until and unless we have a more definitive ruling, the matter of transport of alcohol remains a violation of the cited Ohio Revised Code section and you should expect the Ohio State Highway Patrol and the Ohio Investigative Unit to apply the law as it sees fit.

It is illegal in Ohio for anyone under 21 to purchase, possess or consume an alcoholic beverage.  A conviction of Underage Consumption is a first degree misdemeanor and carries a maximum fine of $1,000.00 and/or up to six months in jail.  Despite efforts to lower the drinking age, the law remains rigidly enforced.  Athletes, students on scholarship and students who live in on-campus housing may face additional harsh penalties for underage drinking and be particularly vulnerable to the penalties that are sure to follow an arrest.  Ohio Revised Code Section 4301.69 contains most of the information concerning underage alcohol possession and use. Penalties are in Ohio Revised Code Section 4301.99.  In addition, no underage person can knowingly furnish false information in an attempt to purchase beer or intoxicating liquor pursuant to Section 4301.634 of the Ohio Revised Code.

The law on direct shipments to your home (or fraternity/sorority house) have been changed several times and will remain the subject of legislative intention.  The latest change effective June 29, 2011 allows for the direct shipping of beer to Ohio consumers by out of state beer manufactures, brand owners or United States importers. The law now requires the out of state beer manufacture, brand owner or United States importer to hold an “S” class permit in order to direct ship to Ohio consumers. Ohio manufactures of beer are allowed to direct ship their products under their existing A-1 permit.  If you have any questions, please contact the Beer & Wine Section at 614-644-2411 or check with an attorney who makes a practice of helping college students.